This post is based on an article I recently wrote for an internship application, so it’s more formal than a typical post, but I think it’s a cool story that helps explain how the flu vaccine works. Enjoy! And stay healthy!

After more than 2,000 confirmed cases and over twenty deaths, the 2013-14 flu season is still approaching its peak.  Vaccination remains the best prevention despite the flu vaccine’s hit-or-miss reputation.   Each year the U.S. Food and Drug Administration recommends three strains of influenza that the World Health Organization believes are worth targeting, and six months later the season’s new vaccine is distributed. 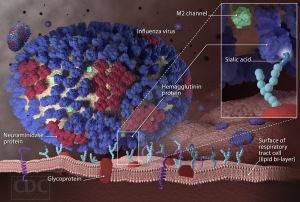 This nasty viral particle is trying to get inside a cell. It’s covered in NA (red) and HA (blue) proteins.

One of the flu vaccine’s biggest problems is its inability to induce immunity against multiple viral subtypes.  Subtypes of the influenza A virus, like H1N1 or H5N1 are distinguished by the surface proteins hemagglutinin (HA) and neuraminidase (NA).  The vaccine can protect against a few subtypes at a time, but if a subtype not included in the shot makes a strong appearance one season, not much can be done to prevent it from spreading.  This year, the vaccine is pretty spot on. It includes H1N1 which has been making a comeback this year.

This problem has driven researchers to pursue a universal vaccine that could protect against multiple subtypes.  This type of protection is called heterotypic immunity.  One group of scientists from St. Jude Children’s Research Hospital hit on an unexpected way to expand the reach of one flu vaccine to multiple subtypes.  Dr. Maureen McGargill and her group published their study in Nature Immunology in December.  They studied how a common immunosuppressive drug called rapamycin influenced the ability of vaccinated mice to generate heterotypic immunity.  They vaccinated mice with one viral subtype and infected them with three other lethal subtypes.  Surprisingly, the mice who got rapamycin were better able to resist infection by all the subtypes, including an altered H5N1 strain, commonly known as the avian flu.

Rapamycin is commonly used to dampen the immune system to prevent organ transplant rejection.  It blocks an immune system regulating protein called mTOR.  Three other animal vaccine studies previously found that rapamycin enhanced generation of memory T cells, cells that can remember a virus and kill infected cells when they detect viral proteins.  None of these studies linked higher numbers of memory T cells to protection from infection.  McGargill’s group observed both higher memory T cell numbers and better protection, but could not link the two. Rather, they found that protection was related to changes in the kinds of antibodies that the vaccine induced.

The flu vaccine contains pieces of viral proteins called antigens and mice and humans make antibodies that specifically bind these antigens on the viruses and neutralize them.  The more specific the antibodies are though, the more they drive those proteins to mutate so the virus can escape detection.  This shape-shifting tactic is called antigenic drift, and it is part of the reason it is so difficult to predict which vaccine formulation will be most effective each year.

The coveted universal vaccine would induce antibodies that recognize parts of the virus that are shared, or conserved, by many subtypes and unlikely to mutate.  But B cells, the cells that make antibodies, tend to make more and more specific antibodies over time.  Over several weeks, B cells go from making weak, broadly binding antibodies that can cross-react with many subtypes, to strong and specific ones.   McGargill and her colleagues found that rapamycin interrupted this process and caused the mice to make more of the broadly binding antibodies.  The antibodies also targeted different parts of the hemagglutinin protein.

The group could not determine exactly how the altered antibodies contributed to protection from infection.  They concluded that the antibodies produced after rapamycin treatment were less specific and therefore able to cross-react with several viral subtypes.   As a result, the treated mice were less susceptible to the three different influenza subtypes.

These findings could be useful for quickly designing broadly protective vaccines in the face of a new subtype outbreak or epidemic.  It currently takes about six months to manufacture the annually recommended formulation.  A heterotypic vaccine would not be as dependent on the World Health Organization’s laborious surveillance and data analysis, and could be stored and used for many flu seasons.