The other day I found myself in the break room near my lab eyeing a container of chocolate-covered nuts left over from the Christmas holiday.  Someone left them out as a treat for foraging graduate students and post-docs.  I stood for a moment holding a single piece in my fingers and as I was about to put it into my mouth, I remembered—Norovirus!

I had no reason to think the nuts could be a reservoir of norovirus, but I did have good reason to avoid shared uncooked food with an unknown history.   A good chunk of my family had just had their holiday ruined by the virus, sometimes known as the 24-hour bug or stomach flu.  It causes gastroenteritis, or inflammation of the gut, complete with diarrhea, vomiting and overall exhaustion.  It can only be transmitted via stool or vomit, and though there was certainly none of that visible in the bin of delicious looking nuts, I began to think of all the hands that may have been inside. If it came from a family holiday party, some of those hands may have belonged to kids who haven’t yet learned to wash them for a full 30 seconds after using the bathroom. I threw the candy away, closed the container and left the break room.

I may have avoided norovirus that day by a judicious food choice, but not everyone has that moment of doubt before sharing a drink, holding a child’s hand or ordering a deli sandwich.  It is sometimes just unavoidable, especially because it’s contagious for up to two weeks after the first horrible 24 hours. The center for disease control estimates that 19-21 million people are infected with norovirus each year and it’s actually responsible for somewhere between 600 and 800 deaths per year. Those most vulnerable are either over 65 or under 5 years old.

These figures are driving researchers to search for a vaccine, even if just for those most vulnerable or during outbreaks.  But norovirus, or I should say noroviruses are particularly complicated. They are split into 5 groups (I-V) based on how similar their DNA sequences are. Those groups, called genogroups, are split into anywhere between 8 and 30 genotypes and those can be further divided into variants.  The classification is complicated enough to require the use of a software program that compares genome sequences.

Only three of the genotypes can infect humans and the strain GII.4 has been the most common cause of outbreaks since the early 2000s.  For decades before that, a different strain dominated, and the power structure may shift again.  The abundance of genotypes and variants and their changing frequencies in communities make vaccine design a daunting task.  On top of that, researchers are still discovering new genotypes and variants.  In 2012 a strain called GII.4-Sydney was identified in Australia and made its way to the UK and the US within a year.

There is evidence that infection with norovirus can generate immunity in some people, meaning that once they get infected, they are protected from re-infection for some weeks or months. However, no one knows how all of the viral subgroups and variants might affect immunity and vaccine design. In a study published in September, researchers from the University of Florida infected mice with one of two closely related norovirus strains and found major differences in the immune responses.

One of the two strains was much better at activating a class of immune cells called antigen presenting cells. These include dendritic cells and macrophages, and they are experts at displaying pieces of virus and training B and T cells to respond to the infection and turn into memory cells. As a result of the enhanced response, infected mice were protected from a reinfection six weeks later.

{Researchers determine “protection” by measuring how much virus shows up in an animal’s organs after infection. In this case, they measured norovirus in the small and large intestines and in the lymph nodes attached to the intestines.}

Oddly enough, the researchers narrowed down the cause of these changes down to a group of structural proteins whose sequences only varied by about 10% between the two strains.

A key finding in this study was that the protective norovirus strain protected mice from re-infection with both strains.  This is important since any vaccine against norovirus would have to protect against several strains and genotypes. It also points out specific characteristics of the immune response that make all the difference between becoming immune or getting re-infected, for example, robust antigen presentation and B and T cell memory.  A vaccine that could foster those characteristics could potentially protect people from several norovirus strains.  It may take a while to get there. In the meantime I will keep my hands clean and out of community candy dishes. 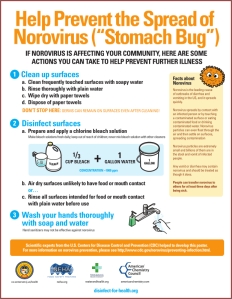 In my last post, I wrote about how the vaccine against whooping cough or pertussis (the “p” in DTaP) may be wearing off.  Scientists are hard at work characterizing the basics of the immune response to the current acelluar vaccine (DTaP) and the formerly prevalent whole bacteria vaccine (DTP).

What exactly does it mean for a vaccine to “wear off”?  Effectiveness is generally measured by how many vaccinated people get sick.  To follow the immune response to a vaccine, scientists measure immunoglobulin (Ig) levels in the blood.  Ig is made by B cells when these cells detect components either made by bacteria or viruses or engineered into vaccines. Among other things, Ig tags bacteria and viruses as a signal for other cells to attack. As the initial immune response downgrades, B cells that make the strongest-binding Ig are stored as memory B cells or as a different form of B cell called a plasma cell.

Memory B cells wait quietly until they see the same microbe and quickly divide and make large amounts of Ig when they do. Plasma cells wait inside bone marrow and constantly release Ig into the blood as an early defense against any re-exposure to a microbe. Measuring Ig over a long period of time is essentially measuring the health and activity of the plasma cells in the bone marrow.  Ig from both types of B cells help neutralize a re-invading pathogen.

Vaccine protection could wane if the vaccine didn’t produce enough memory B cells or plasma cells, or if cells formed but then quickly died off.  So Ig levels, memory B cells and plasma cells have been common benchmarks to study after vaccination.

Kids enrolled in a Dutch study published in September experienced major drops in pertussis-specific Ig two years after their last booster shots.  But this was true for both the whole bacteria and acellular vaccines.

These results are difficult to interpret because the researchers measured Ig responses to the very three proteins engineered into the acellular vaccine.  The whole bacteria vaccine has a lot more than three proteins that B cells can respond to. So even if Ig levels to the three proteins in the study may be lower, the whole cell vaccine could be inducing an overall higher amount of Ig that is just spread over a larger number of proteins and that information could be missed.

By counting memory B cells from in blood samples the scientist also found that kids given either type of vaccine produced some memory B cells that expanded during the first month after booster but dropped back down by the two year time point. Measuring plasma cells in bone marrow is a bit more challenging in human volunteers, but a study published in 2010 tried to compare these cells in mice after giving them DTaP or DTP.

This group actually found more plasma cells in the bone marrow of the DTaP -vaccinated animals. (Again, the issue of only testing the three antigens found in the DTaP may have skewed these results.) They also found poor memory B cell survival and responsiveness to both forms of the vaccine.

The B cells don’t seem to be acting differently in response to the two vaccines. In fact, the current data suggest that B cells do better after the DTaP, so poor B cell responses are unlikely the main culprit behind the vaccine’s waning protection.

Memory T cells are another force to be reckoned with for infectious bacteria like B. pertussis. The same Dutch study that found better long-term pertussis-specific Ig after the acellular vaccine also saw better T cell responses a year after boost with the whole bacteria vaccine.

An in-depth look at the pertussis-specific memory T cells suggested the whole bacteria vaccine may be better at making memory T cells. Instead of making Ig like memory B cells, memory T cells respond to re-exposure to bacteria or viruses by making immune-stimulating proteins called cytokines.  A group of researchers cultured T cells from kids given the acellular or whole cell vaccine with pertussis proteins (again the same three found in the acelluar vaccine).  The T cells made after whole bacteria vaccine responded by making more cytokines than the ones made in response to the acellular vaccine.  These T cells also divided after detecting the pertussis proteins and were twice as likely to make cytokines and divide at the same time.

These are early studies, but it seems that the T cells may be what differentiate the two vaccines.  None of these basic immunology studies followed kids over time to see whether they became infected.  Hopefully this last study will encourage researchers to look for any relationships between T cell responses and long term pertussis immunity.