The recent US measles outbreak ended just over a week ago. But with an even larger outbreak ongoing in Sudan, and rising concerns over the possibility of one in Nepal, measles vaccination is still a hot topic globally. (Though for me, viruses and vaccines are always hot topics).

I saw a graph a couple of months ago that shows a huge plunge in measles cases and deaths in the few years leading up to the 1968 licensure of the measles vaccine. The graph actually comes up quickly if you do an image search for “measles graph.” I’ve seen it used to support the argument that the measles vaccine just doesn’t work and is therefore not worth the trouble.

I dug up the primary data used for this graph and made my own (below). It shows that measles cases dropped before introduction of the 1968 vaccine (measles deaths follows the same pattern). But you’ll also see that this plunge occurred two years after the first version of the measles vaccine was licensed in 1963.  I am not a public health expert, but it’s pretty clear that the drop in cases and deaths from measles came after licensure of the initial measles vaccine. 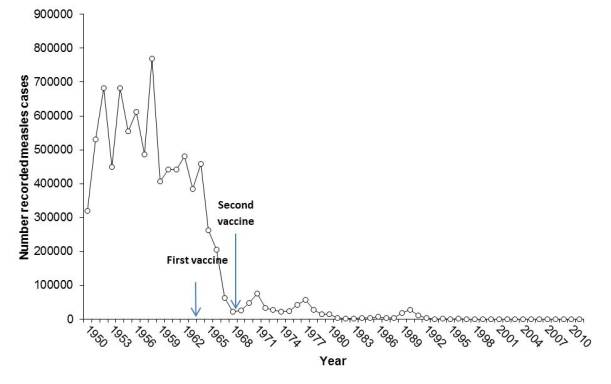 I did this research to both appease my curiosity and demonstrate that the question of whether the vaccine works on a population scale has been settled for a long time.  That doesn’t mean that on an individual level it’s impossible to get sick even if being vaccinated against measles.

There are many potential reasons one may not respond to a vaccine. These range from very basic reasons, like the vaccine being stored at the wrong temperature or being injected incorrectly, to complex biological reasons that are active areas of ongoing research.  For example, we know that mothers’ antibodies (or immunoglobulins) circulate in newborns for about 12 months. Although these antibodies can protect a newborn from pretty much anything its mom is immune to, they also prevent the child’s own immune system from generating memory responses to the same diseases. Mom’s antibodies can actually cover up viruses and bacteria and hide them from baby’s immune cells. They can also form complexes with bits of virus or bacteria that bind a receptor that shuts down B cells, the cell responsible for making new antibodies. This receptor, called FcγRIIb, is part of a negative feedback system that tells B cells when they’ve made enough antibodies.

All of these possibilities are part of why the CDC recommends two shots separated by at least a month; statistically, getting two shots means you’re covered because the chance that your immune system would miss out twice in a row is very low. Still, the only way to be 100% sure an individual responded to the vaccine is to measure the level of antibodies in the blood that can bind to and neutralize the measles virus. For different viruses, there are different thresholds for the concentration of antibodies needed to protect a person from getting sick. When a vaccine is first tested, antibody levels are monitored to make sure it actually works. After that, it would be too expensive and unnecessary to measure antibodies in every person who receives the vaccine. So, even though two shots should do the trick statistically, there’s always a remote chance the vaccine just didn’t induce a good immune response, and most of the time, no one would be the wiser.

There was such case in New York City back in 2011, in which a woman who had gotten both requisite vaccinations still managed to get sick. The researchers who did this study measured measles-neutralizing antibodies in the woman’s blood and found that she was making a kind of antibody that the body mainly produces the very first time it sees a pathogen. That kind of antibody is called immunoglobulin M (IgM), and it’s a sort of knee-jerk, immature antibody response that keeps the virus at bay as the immune system generates the more mature, “stickier” IgG. So her body was acting as though it had never seen the measles before, even though she was vaccinated twice.  This is not a huge surprise; even after two shots, the failure rate for the measles vaccine is 3%.

What was unique was that she also ended up spreading measles to 4 other people who were also vaccinated (that’s 4 out of a total of 88 contacts).  All of these people made strong IgG responses and none of them spread the virus to anyone else. And, unlike the first case, none of them were hospitalized—even one who was on immunosuppressive drugs. So this study shows that yes, it is possible to get measles and even spread it to others if you’ve been fully vaccinated. It’s an anomaly, but it’s possible. In fact, that’s what made this case so interesting—the fact that it was so unlikely.

With all the variables of human life, it’s a wonder that the measles vaccine works 97% of the time. This study shows that even when it doesn’t work, the measles virus can’t go far if enough people are vaccinated. The strong secondary immune responses of those 4 cases made their illness less severe and reduced their chances of spreading the disease any further.

Why Evolution Is True
A Cold Eye